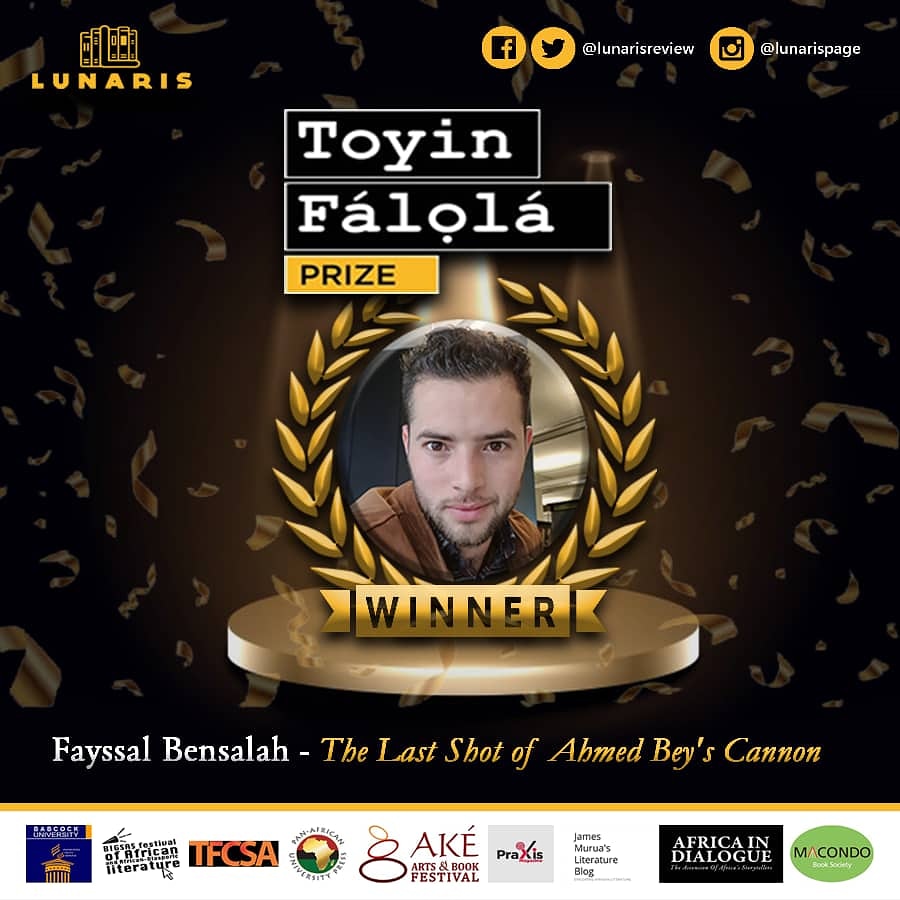 Fayssal Bensalah has become the first-ever winner of the Toyin prize with his wonderful story, “The Last Shot of Ahmed Bey’s Cannon”. During the announcement ceremony at the 2020 Ake Arts and Book Festival, he stated that his aspiration is “to be among the first Algerian writers who write in English, to pioneer a new literary tide of Anglophone Algerian fiction, and this award has turbocharged me to pursue this aspiration further and to keep writing unabated.” The 26 years old Algerian writer has been “writing in English for the past 5 years,” which makes English his third working language alongside Arabic and French. Fayssal has an MA in British and American Studies from the University of Constantine in Algeria and is currently a Creative Writing Ph.D. student at Cardiff University.
.

In its inaugural year, from a total of 784 eligible submissions to a longlist of 24 and then a shortlist of 8, the Toyin Falola Prize has proudly staked its claim as an agency concerned foremost with discovering, enhancing, and promoting African creativity, and we’re more than convinced of its success as it progresses.

Of the final three stories we had to consider for the winner, two were in competition for the prize. They showed great understanding of character development and how to work with and move plots in unexpected ways. They also revealed a practiced hand at crafting lean, concise, and sparkling sentences, as well as impressive use of dialogue. However, what “The Last Shot” had going for it that stood it above its competitors is that element that you can’t define: the whao factor. It was the story that showed the most promise; that stayed with the readers and judges the most, and that simply left you amazed and guessing at its twists and turns. It was unpredictable, deeply historical without trying to be, and it had the capacity to wrestle your thoughts for attention long after you have read it. Like one of the readers said, what a cannonball of a story. “The Last Shot of Ahmed Bey’s Cannon”, set in the Algerian East, is about a middle-aged Algerian professor who goes home in pursuit of love.

However, we also want to praise Faraaz Mahommed’s story ‘This is My Body’ and Somtochukwu Ani’s “A History of Celestial Bodies”. If we had more than one winner, these stories would have clinched the prize. 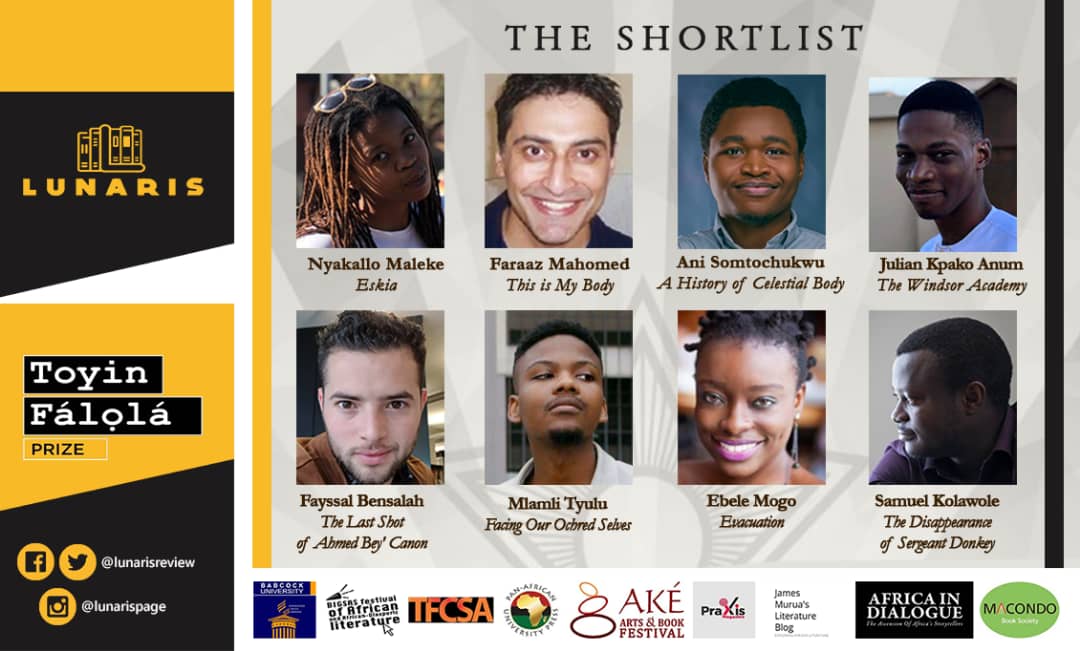 For the inaugural edition of the Toyin Falola Prize, we hereby unveil a shortlist of eight entries. These 8 finalists, selected out of a total of 784 eligible submissions from the length and breadth of Africa, have inched closer to picking up the $1,000 along with a fully-funded travel trip to attend the BIGSAS Festival of African and African-Diasporic Literature in Bayreuth, Germany. We congratulate them on this remarkable achievement.

Their names and the titles of their entries are:

This prize specifically solicited from Africans between the ages of 18 and 35, short stories that creatively imagine the history of a place, people, time, or event on the continent. As you must know, the person for whom this prize was named, Toyin Falola, is one of the world’s most distinguished historians. A proud African, he has about four decades of productive activity as a historian and a public intellectual behind him.

In creating this prize in his name and strictly targeting a youth demographic, we unabashedly state this project’s aims is to make a historian out of young Africans. We envisage Africans would learn more about the history of their continent and hone their craft in writing it for their generation. We also wanted to explore the diversity of narratives and experiences of living in Africa or being an African from the perspective of young Africans. This is a storytelling competition, but at the same time, it is also an activity that challenges young Africans to produce their histories and learn how to do so effectively. We wanted to know how young Africans can engage their history and narrate it to their peers in the language and lingo of their generation. Also, given that many African youths have not had enough publishing infrastructure and similar outlets to express their creative abilities, a prize like this one is a foundational step towards discovering writers with potentials and ready to take on their world with their craft. Therefore, one of the key considerations in selecting this shortlist is finding those candidates who can write a sliver of African history in creative and engaging ways.

As judges for all literary competitions say, we got so many good entries that it was hard to come up with a final shortlist. For this prize, we too faced a similar challenge of selecting the finalists. Being a judge in this competition meant that we were introduced to such a broad array of stories from every corner of the continent. These stories delightfully brought the diverse experience of being Africa in contemporary times quite close. However, the vastness of the entries presented several challenges as various writers interpreted the theme of the competition from broad perspectives. In judging these works, we were quite mindful that our decisions in judging these prizes would go a long way in setting the tone for the future of this competition, and likely how creative African writers will engage their history in the long term. How, therefore, can one best judge short stories that were written based on a narration of history without shortchanging either the content or the form?

For instance, we tussled with the question of comparing a historical event of the Rwandan genocide that featured several times in the entries’ list with a narration of a “less eventful” historical event, but superbly written? How much value should be placed on the history vis a vis the quality of writing? Again, we found that several writers tended towards didacticism in their account of their country’s histories. As much as we acknowledge that approximating the lessons learned from history also reflects the writers’ anxieties about how the future would be shaped, there are many occasions when the urge to moralize overwhelmed the delight of reading a literary account. This shortlist reflects the various balances we had to strike in selecting the top candidates.

Then there was the youth angle. In a prize directly targeted at a youth demographic between ages 15 and 35, which should take the preeminence in the assignment of points: the promises and potential of the writers especially the ones at the younger end of the spectrum who might be highly promising but have not have had the opportunity to hone their craft as well as those who have been on the art scene for longer? Or, should we focus on strictly the quality of the work itself? We weighed all these factors carefully in selecting the stories for this shortlist.

While some of these factors mentioned above presented some challenges to evaluating the stories, they did not take away from the delight of reading these stories. We thank everyone that submitted an entry for giving us the sheer pleasure of reading your work.

Today, the shortlist we present to you includes stories that chronicle the experiences of young people growing up in Africa as reflected in what they write and how they write.

Once again, we congratulate every single one of these shortlisted candidates.

After an overwhelming number of submissions that exceeded our expectations, we are excited to announce that the following 24 stories (arranged alphabetically) and spanning 7 countries from the continent have made the long list:

Getting the 24 from over 800 submissions that spanned over half of the countries on the continent was a hard task, as at the very last minute we had to let some stories go—stories we very much loved. If this is an indication of anything, it is that there are brilliant writers on the continent, attested to by the fact that we could not help but extend the initial slot of 21 stories to 24. This is how interesting and exciting the submissions were. And we have our readers and esteemed Judges, who rose to the occasion, to thank.

This is also a very strong indication of the weight of the Toyin Falola Prize and its mission to enhance creativity on the continent through the facilitation of opportunities. It is in line with these visions that the prize partnered with reputable institutions like Babcock University, Bayreuth Literary Festival, Ake Festival, Pan-African University Press, and many others to provide opportunities, a robust prize money, publication, and visibility for entrants.

Of the prize, one of the judges, Dr. Abimbola Adelakun, had this to say:

It is exciting that there was a broad range of themes in this premier edition. The stories submitted range from issues around war, trauma, violence, love, mythological tales, family relationships, abuse, politics, and so on. All of them mirror African youths’ perception of their continent and how they can relate it in creative forms. If the inaugural prize could be this exciting, then there is a lot to look forward to already.

We are excited about the prospects of the prize, the stories that we got as well as those that have made this long list. We also look forward to the shortlist. Congratulations to these writers.